to lose sight of Jesus in the hearth of our lives.

We have bills, schedules, chores and all manner of earthly responsibility. Sometimes there’s so much in the tasks at hand, we momentarily relinquish the kingdom at hand. I mean after all you’ve only got two to hold em with. I would not say this lightly, and I know our wavering isn’t always between belief and unbelief, but instead we find ourselves recalibrating what is in the center of our lives.

38 Now it came to pass, as they went, that he entered into a certain village: and a certain woman named Martha received him into her house.

39 And she had a sister called Mary, which also sat at Jesus’ feet, and heard his word.

40 But Martha was cumbered about much serving, and came to him, and said, Lord, dost thou not care that my sister hath left me to serve alone? bid her therefore that she help me.

41 And Jesus answered and said unto her, Martha, Martha, thou art careful and troubled about many things:

42 But one thing is needful: and Mary hath chosen that good part, which shall not be taken away from her.

Our responsibility and duties ARE our office. As parents, employees, friends; it is our calling to excel in these position bringing the Light we have received into those places. So surely, Martha is not reprimanded for doing what was her occasion to do. It couldn’t be sinful to be on top of our appointed work so what is it then? How is lazy Mary preferred before diligent Martha?

Martha wasn’t left field, Mary was. In this cultural context, Martha was in her office keeping house; and Mary, a woman, at the feet of the visiting Prophet having no place there. But she has chosen the good part says the Anointed. On the surface it appears she is celebrated for abandoning her chores. But God sees she forsakes the societal norm to be at the feet of Jesus, her devotion outweighs her concerns.

In reality, considering the Son of Living of God is in the room, Mary is the only sane one. 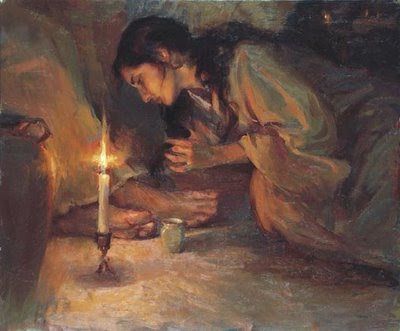 She postures herself to receive His every word. Martha was doing what she felt was her occasion but what she misses is that the occasion was to be near Jesus. When the King is present, everything else can wait; she fails to prioritize correctly.

Even doing the work of the Lord, wether the mundane or even the ministerial, it is possible to forget saving a time for Jesus. A time to put it down for a moment and give The Good King His due time. Sometimes we feel like we don’t have a moment, but if we could scavenge for one, I am confident you will be surprised what God can do with one seemingly meager moment.

3 Then took Mary a pound of ointment of spikenard, very costly, and anointed the feet of Jesus, and wiped his feet with her hair: and the house was filled with the odour of the ointment.

4 Then saith one of his disciples, Judas Iscariot, Simon’s son, which should betray him,

5 Why was not this ointment sold for three hundred pence, and given to the poor?

One mere pound of ointment filled the whole house.

What could change about the space we’re in, if we would stop for a time to pour out our oil of praise, worship & devotion at the feet of the King? Would the fragrance of that moment fill our atmosphere?

In our striving to honor God there are two voices of contention: Martha and Judas. Martha embodies the distractions of life, societal expectations and the urgency of earthly matters. Judas voices the ridicule of the world; the son of perdition echoes the mockery of the enemy. It is the believer’s assignment to wrestle against those voices, but what awaits on the other side of that struggle?

When Lazarus died (Martha & Mary’s brother), Jesus makes His way to establish a testimony that will reverberate through the nation. Martha, on hearing of His arrival rushes to Him knowing He is able to do the unthinkable. What is of note is that before Jesus resurrects His friend, He makes a call for Mary, the devoted.

Jesus makes sure that she who was devoted to Him gets to see the wondrous thing He’s about to do. Our devotion will not only bring peace to our lives and joy in our solemn moments, but it builds on a relationship that Jesus made the highest sacrifice for us to be able to engage in. And so this is His response: the devoted will see Jesus work miracles. He will make sure of it.

And that’s worth a moment. How much can God do with a moment? You know He IS the God that multiplies right? Join the Heavens in worship some time today with a song, with a praise or with thanksgiving. Hush the voices of contention, and pour it on out.

Let the fragrance fill your house.